Burns and the Referendum. 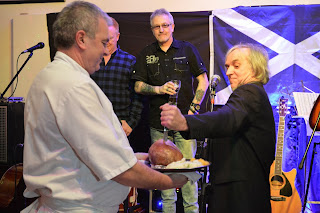 By Willie Drennan [For Issue 13 of The Folk]
Burns Nights are remarkably popular in Northern Ireland. What would the Immortal Bard think of Scotland separating from Northern Ireland and the rest of the United Kingdom?
Rabbie Burns (1759-1796) will no doubt be birling in his grave at the claims by certain folk that they know how ’s National Bard would vote, if he were around, in the upcoming Scots Referendum in September 2014.
The reality is this bard was a complex character who considered the views and concerns of everyone. He gave great consideration to the politics of his day: he scrutinised political doctrines and offered opinions through his poetry and letters to friends and correspondents. It is true that he was a Scottish patriot, with songs such as Scots Wha Hae Wi’ Wallace Bled and A Parcel O Rogues In A Nation. In ‘A Parcel O Rogues’ he was taking a swipe at the Scottish aristocracy who “were bought and sold for English gold” in the early 18th Century prior to the Act of Union in 1707. Today he would take those same sentiments and try to weigh up if it was the selling out to English gold, European gold, or international gold that was the current problem. He would probably also consider the possibility of an independent becoming subservient to even greater parcels of Brussels-based multi-national rogues.
Those in Scotland today who are campaigning for a ‘Yes’ vote seem to consist of a mixture of republicans, British monarchists and Jacobite sympathisers. The Jacobites will point out that Burns re-wrote and recorded old romantic Jacobite songs for the but probably won’t note his songs on the battles of Sherramuir and Killiecrankie: nor his, Ye Jacobites By Name which highlight the futility of the Jacobite cause. They will also dismiss any significance to the fact that Burns attended a church service in 1788, which commemorated the centenary of the landing of King Billy in .
The ‘Yes’ campaigners who would like to see the monarchy retained, with an independent Scotland remaining as part of the British Commonwealth, will be able to point out that Burns swore allegiance to the British King George while working as an exciseman.  Republicans will also be able to highlight Burns’ sympathy for the ideals of the French and American Revolutions.
They will do well however not to mention that after the French Revolution, when France threatened to invade Britain, Burns joined and actually helped to form the Dumfries Volunteers for the purpose of defending Britain against a possible French attack.  When Burns died in July 1796 he was buried with full military honours. For the Dumfries Volunteers he wrote Does Haughty Invasion Threat?  ‘No’ campaigners could be forgiven for making reference to this song with verses like:
“Be still to true, Amang oursels united!
For never but by British hands, Maun British wrangs be righted!”
Perhaps some ‘Yes’ campaigners however, who are also Burns’ fans, will find solace in this song’s closing lines:
“But while we sing God save the King, We’ll ne’er forget the people"
Posted by theulsterfolk at 06:07