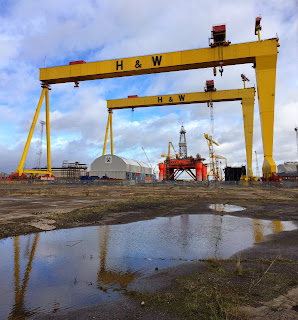 Northern Ireland's economy is in transformation from being manufacture based, such as shipbuilding at Harland and Wolf, to being Public Sector dependant. Innovative alternatives are the order of the day. The recent oil rig restoration project temporarily lit up skies of potential for .

The Belfast Telegraph is to be commended for having a front page on wages rather than Haass this day in January (not that I could find it in the online version).  It noted that "wages" (actually, annual salaries) are £8,000 higher in the of and £5,000 in than in .  However, the obvious assumption that high wages are a good thing needs challenged.

Currently, is seen as the star pupil of the European economic class, while is seen as one of the problem children.  How different it was ten years ago!  What changed?

Essentially, the problem up to around 2003-4 was that German wages were too high.  This meant that it was easier, even for German companies, to out-source jobs elsewhere.  Audis came to be assembled in , Volkswagens in , Siemens call centres even sprang up in . The response - actually of Gerhard Schroeder's government although Angela Merkel has ended up with most of the political credit - was to reduce unemployment benefits and use the savings to help people up-skill and find new jobs.  In turn, this put downward pressure on German wages, which have barely risen in real terms over the past decade. However, this also put downward pressure on the cost of living, and made a much more attractive investment location - hence a current unemployment rate of around 5%, with even youth unemployment well under 10%.

That high wages can be a curse rather than a blessing is demonstrated the other way around too. In , the second stage of the Celtic Tiger boom saw wages soar, an unbelievable 50%.  This in turn put upward pressure on public sector salaries and drove up the cost of living (most obviously property prices).  However, unable to devalue its currency (because it didn't have one of its own any more), this made an incredibly expensive place to employ anyone.  What happened was the reverse of what happened in Germany - unemployment reached 15% and even that was shielded by emigration levels reaching astonishing levels (in fact coming close, comparatively, to those of Northern Ireland's at the height of the Troubles).  The glee with which the Irish Government recently borrowed money at an interest rate of 3.3% is misplaced, as this is far higher than is affordable (with economic growth still low), and already the cost of living in Dublin is soaring alarmingly - in part due to wages being at a still unsustainable level.  Thankfully it is not all bad news, as Irish exports (the only way of creating wealth to pay off the country's vast debts) are improving.

The lesson is that, to be sustainable, wage levels must reflect the value of the work produced. In , there is a mix of bad and good news here.  The bad news is that our private sector wages do remain far too low, a consequence largely of a (deliberate but thankfully now abandoned) policy of promoting specifically as a low-wage investment location. In fact, low wages by European standards make it impossible to compete on wages against truly low-wage economies (obviously China), but also make it impossible for businesses here to recruit competitively either against the public sector here or against the private sector in neighbouring jurisdictions - it would be interesting in the effect on the corporation tax debate of businesses promising to use any reduction to increase wages.  The objective in fact is to compete on quality, which is where we have the good news.  We are now doing the right things on skills to enable our workforce to contribute more value to the economy and thus increase wages sustainably - including a huge expansion in STEM undergraduate places, a key ICT Action Plan, a currently on-going Review of Apprenticeships and other measures introduced in the past three years targeted specifically at the needs of the modern economy. We must now begin doing similar things in our schools, where still too much esteem is given to professions which do not create wealth - something we must do if we are to compete globally and continue to afford the free health and comprehensive welfare systems we rightly cherish.

It is good that the debate around wages has started; but we must also be aware that comparatively high wages are not necessarily a good thing.   Wage levels must be sustainable in the longer term.  To do that, we need to focus on education and skills - areas in which is now beginning to do the right things and has the potential, before long, to excel.