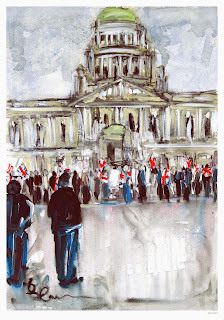 [By Willie Drennan for Issue 13 of The Folk]

I think it is fair to say that some positives came out of the Haass experiment. In particular it allowed for debate on our political and social problems in a holistic manner. I think our politicians now understand that it is a good idea to deal with delicate and controversial issues in a manner that considers the bigger picture and considers the impact that such decisions can have on the country as a whole. It is the sort of debate that should have happened before the famous Belfast City Council decision on the flying of the national flag at .

We aren’t really that much further forward, are we? I think it might have to do with the fact that the Haass Team were listening primarily to the proposals of the five main political parties at Stormont who were hiring their services. They certainly didn’t listen to me.

I sent in a contribution in the official manner, as printed in Issue 12 of the Ulster Folk and linked other blogs and comments via the #Haass hashtag on Twitter: which they are bound to have read. They didn’t consider my point however, that what was needed was clear common sense guidelines on parades and protests that would apply for all: irrespective of political or religious persuasion. Guidelines that considered human rights and freedoms while ensuring that deliberate offensive acts would be dealt with by the law.

They didn’t address my suggestion that a line of differentiation should be drawn between parades commemorating historic events, such as those of 1912 -1922, and parades that make reference to the recent Troubles. Simply put, such parades should have restrictions if they pass by the homes or memorials to recent victims of the Troubles.

Okay, I perhaps shouldn’t have used the term common sense: that clearly upset them and they’ve flung my correspondences in the bin.

Seems like the flags aspect of the talks was also dumped in the bin early on as Sinn Fein insisted on the flying of the Irish Tricolour alongside, in parity with, the Union Flag: or else no flag.

They also didn’t pay any heed to the idea of having three tiers of flags flying from government buildings. Firstly, that the Union Flag would fly in a prime position accompanied by a new agreed Northern flag as a secondary status. A third tier would then be the flags of the neighbouring states of , and , irrespective of the outcome of the Scots Referendum: AND, the Irish tricolour. This would demonstrate to visitors that at last we have reached maturity where we can acknowledge the national flag, yet have our own regional flag and have healthy, working and social relationships with all our neighbours.

This would not take away from anyone’s aspiration to have political and constitutional change for a United Ireland that would once again change the order of the flags.

By the way, I fail to grasp how the notion of flying the national flag on designated days only is a compromise? The media often commented that the flag protesters didn’t know there was a Union Flag flying above the until it was taken down. That could also be said of the majority of people in , as designated days are not a meaningful compromise to anyone. On days that it does fly it is a confirmation that is British and when it does not fly it is a confirmation that we are a fragile, dysfunctional State in a constitutional limbo-land.

They didn’t pay much attention to my suggestion that we really need to re-examine the language of the Belfast Agreement to determine and clarify the constitutional position of : to clarify the difference between nationality and citizenship.

I think it’s that common sense thing again that I said. I’ll have to learn to tone down my language.

To be a bit cynical there were an awful lot of people, who said from the moment the Haass talks were first announced, that these talks were designed to facilitate the needs of the main parties at Stormont and weren’t primarily about finding widespread resolution. While we are absolutely no further forward in resolving issues of flags and parading, the five main parties have managed to convince their faithful voters that they have made a firm stance on their behalf.