THEATRE: at The Mill and at Twadell 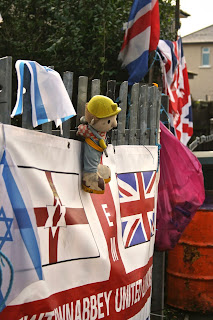 By Willie Drennan for Issue 13 of The Folk

What do Newtownabbey Borough Council and the Parades Commission have in common?

The answer to the above is that they have both made decisions that have interfered with liberty and freedom of expression. They both demonstrate the extent of intolerance that pervades society in : that cripples prospect for progress towards a modern progressive tolerant society.

The banning of the Reduced Shakespeare Company’s Bible play by Newtownabbey Borough Council, from performing at their Theatre at the Mill, was like a blast from a former age. No doubt a satirical play based on the Bible will contain material that some Christians will find hurtful. When this play was first conceived the authors would have had this in mind and would have gambled on protests to ensure box-office success. In this case they probably had their folk on the ground calling up DUP councillors to complain on their behalf.

The fact is this; there are people in our society who actively want to suppress the freedom of speech and expression of those they disagree with. The best thing devout Christians could have done was to totally ignore the Bible Play, stay away from the performance to avoid offence and not offer it massive media attention.

Too late for that now. I had never heard of the Bible Play or The Reduced Theatre Company until it was banned.

On the brighter side the Newtownabbey Borough Council had a re-think and the play was able to go ahead as planned. The same thing has yet to happen with the banning of cultural expression on the last July 12th. The difference in this case is that the Parades Commission seems to have the general backing of the media and a majority of politicians to uphold this enforcement of intolerance. The issues may be more complex than with the Bible Play but it’s exactly the same principle in my mind.

The solution for those who find or Loyalist parades offensive is exactly the same. They should just ignore them, stay away from the performance to avoid offence and not offer them massive media attention.

Too late for that now. The Twelfth of July celebrations in 2014 will surely be the biggest in recent times and the international media will be here in force.

Is it stretching imagination too far to consider the possibility that Loyalists often surreptitiously complain to the Parades Commission in order to promote Loyalist culture?