Why Folk Should Stand Against Fracking. 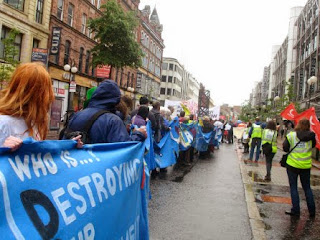 Many people have written powerfully and at length about the inevitability of water, air and land pollution, the climate change arguments, the health impacts, and the long-term economic arguments against unconventional oil and gas extraction. Rather than repeating these cases in abstract I feel that it would instead be useful to look at some of them in the context of , focusing on why fracking specifically poses such a danger to us here.

Four petroleum exploration licenses have been issued in (in Fermanagh, South Antrim, North Antrim-East L/Derry, and ), with a fifth license in North Down being considered.

Resource Use and Pollution
Given that our two greatest industries are Agriculture and Tourism exploiting an energy source that will harm them can only be described as dangerous short-termism. Fracking is extremely water intense, using on average 11 million litres per well. Tamboran, the Canadian-based shale gas exploration company, estimate that they could have 3000 wells in an area the size North Leitrim/West Fermanagh, raising significant questions as to the impact this could have on public and agricultural water access. This becomes even more problematic in light of the evidence as to contamination risks; some 20-80% of the chemically laced water used remains in the well after each frack, mixing with underground substances such as Naturally Occurring Radioactive Material and posing a high risk to nearby aquifers. The 20-80% of used water that returns to the surface undergoes an intense treatment process, though studies have demonstrated that the water is still not suitable for human consumption and yet it could enter our food chain.

Northern Ireland is densely populated, so wherever we chose to frack will unavoidably be near where people live, thereby increasing the damage that can be expected when any of the aforementioned pollution risks materialise. In addition, many of our waterways cross the border; this is particularly a problem in the West where water courses link to the River Shannon and as a result threaten to carry toxins across the entire length of this island.

Fracking will not bring us the jobs or give us the energy independence we need; any jobs will be temporary as it is a temporary solution to our energy woes which by not resolving now will mean even greater public expenditure in the years that follow, as well as the considerable public expense that can be expected in dealing with pollution incidences. By investing in the infrastructure that the unconventional industry needs, for example developing a viable gas network, deprives itself of investment in long term energy solutions, such as the urgently needed electrical smartgrid to collect and distribute the energy from already operational renewable developments.

The Regulatory Context
Many supporters of unconventional extraction cite that most of the concerns can be managed within a strong regulatory framework - with tough laws, enforcement, and compensation. However, considerable doubt has been cast on how effective regulation is; the influential United Nations Environment Programme recognises that there may be 'unavoidable environmental impacts even if unconventional gas is extracted properly'.

has a damning history of environmental regulation and enforcement. The extent to which our current environmental laws are being misapplied and unenforced amounts to a systemic failure of governance, meaning that our framework is so weak that future harm from breaches of it is so likely that it seems unavoidable.

There are multiple elements contributing to this weak governance, for example we have no independent Environmental Protection Agency – the body that enforces the laws, Northern Ireland Environment Agency, is connected to the Department of the Environment, a body which itself proposes developments, this creates the perception that the Department may have influence over what the Environment Agency enforces. Furthermore, the Environment Agency is greatly under-resourced and so has been unable to offer consistent monitoring and enforcement, leading to scandals such as the illegal landfilling operation recently outlined by the independent Mills report which alone will require some £250 million to clear up.

To make matters worse our planning system is open to corruption - is the only part of these islands, and one of the only parts of the Western world, which does not make public who donates money to politicians. This creates the damaging impression that developers, including those in the unconventionals industry, may be donating large sums of money in order to gain more favourable planning conditions. Our regulatory framework does not seem capable of coping with developments as dangerous as fracking, or any contentious developments at all.

In summary we are geographically not well placed to cope with the risks, the costs to our local industries and our limited public purse far outweigh any profits, and we don't have the necessary infrastructure to distribute the gas, resulting in both the gas and the profits being shipped off by the overseas companies that hold the licenses, leaving our land exploited and us quite literally out in the cold.

40% of people in live in fuel poverty, they have to make a choice between heating their homes and eating, fracking will bring neither independence nor the affordability these people need. Locally owned renewable energy could solve many of the needs that fracking masquerades as being able to, but for the benefit of local people and without all the environmental degradation.

The Department of the Environment's announcement of a presumption against fracking until the department is satisfied of the environmental impact provides an encouraging pause for thought, but makes little effort to deal with the specific problems, or take steps to introduce a ban. Until then it is essential that if we care about this land then we do not give the industry a social license; we actively participate in the planning process, and we persist in pushing our politicians for a ban – especially now in the run up to the May elections where Councillors are particularly open to hearing our views. Ultimately we need to make use of the abundance of our renewable energy potential and take a hold of our own clean energy fortunes.