Eric Bell at The Strand 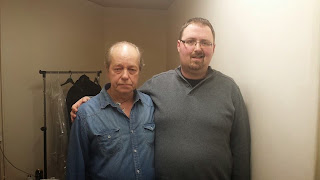 Andy McKinney for Issue 14
On 2nd April 2007 I had the pleasure of seeing a live performance by arguably the best guitarist to ever come from and one of the best in the world in his field.  I am speaking about Gary Moore, blues rock guitar hero and the go to guy for Thin Lizzy when their other six string toters abandoned ship. This concert will forever be etched in my memory for two main reasons. One was that I managed to get backstage due to a chance meeting with ’s father. The meeting backstage was brief but very gratifying. I had my photo taken with him and he also signed a DVD. The other was that it turned out to be his last ever date. On 6th February 2011, passed away in his hotel room in Estepona, , robbing him of the opportunity to play his hometown again. This was another strange twist of fate for me as a couple of years previously I had been living just 30 miles along the coast in .

Scroll forward 3 years and another serendipitous event relating to Thin Lizzy happened to me. I was at the Empire to hear another blueser and Empire resident Rab McCullough. There I was standing like Norman No Mates when all of a sudden I had one of those “Is that who I think it is?” moments. For if my eyes did not deceive me I was now looking at founder member of Lizzy and another born guitar wizard Eric Bell. I approached tentatively and asked if it was indeed Eric. His reply was quick, dry and self-deprecatory, “I used to be!” I said to him that I thought he was a legend to which he replied, “In my own lunchtime”. Soon he had given me a ticket for an event the next evening and was up on stage jamming with McCullough driving the adoring audience crazy.
As a tribute to Eric’s friend and successor in Thin Lizzy, Gary Moore, the BBC had made a documentary called ‘Still Got The Blues.’ Unfortunately, Eric had been unable to contribute, so to rectify this, the Strand Arts Centre in where both men had come from, held ‘Thin Lizzy’s Eastern Stars.’ This was on Friday 14th March 2014. The night was put together by two of ’s top music journo’s Stuart Bailie and Mike Edgar who had worked on the documentary. They showed the documentary again and then Stuart interviewed Eric about , about Thin Lizzy and about his life in general. Eric had nothing but praise for but one got the feeling that just like with Mick Taylor and the Rolling Stones, Eric’s relationship to the Thin Lizzy brand is somewhat ambivalent. Were it not for Thin Lizzy he would not be known worldwide, especially through that inimitable intro to ‘Whiskey In The Jar’ but now that has almost become a noose around his neck. Of course he will play a couple of Lizzy numbers but having only been a member for 4 years and 3 albums, 40 years on he still has not established himself as a solo performer to the degree that Gary Moore managed to do. In the light of the performance that was to ensue, this shows how unfair the music business is.
’s place as a contemporary of the blues rock boom of the Sixties was evidenced by his choice of material. Starting off with ‘Shake Your Money Maker’, which was popularised by fellow blues boomers Fleetwood Mac, Eric moved on to pay tribute to another much missed guitar hero from , Rory Gallagher. He played a barnstorming version of the Taste era classic ‘Same Old Story.’  Eric’s signature tunes from Lizzy days, ‘The Rocker’ and ‘Whiskey In The Jar’ were given extended treatments with the James Bond theme thrown in. These kept the crowd happy.
Eric also showcased his talents as a phenomenal slide guitarist on the Willie Dixon classic ‘Hoochie Coochie Man.’ The crowd was given a very pleasing send off with ‘Gloria’, which allowed Eric to doff his hat to another brother from the East, Van ‘The Man’ Morrison.
One of the big difficulties for Eric as a solo performer, especially when he does Lizzy numbers is that as a vocalist he will always be compared to Phil Lynott. This is not to suggest that Eric cannot sing. For blues and rock he has a great voice, but as a singer Lynott was in another league. Here again the ghost of Lizzy is potentially a curse rather than a blessing. The counterbalance to that is that I got to listen to a guitarist whose approach has that Hendrix-like mix of genius and chaos. You get an element of danger, which includes; feedback noise, using the microphone stand as a slide and an aggressive lead style where notes can be fired out bullet like. Eric also has a keen sense of fun and his stage patter is very humorous.
This was a once in a lifetime opportunity and we must take our hats off to the Strand for keeping such a great old cinema building open for both movies and other events like this. The fact that it was free was even more amazing. Let’s do all we can to support them. If you go to see Eric Bell live don’t expect a Thin Lizzy tribute act. Go to see a guitar legend tearing it up and showing that despite having earned his bus pass, there’s still plenty of whiskey in his jar!