Tartan Gangs and the 'Hidden History' of the Northern Ireland Conflict 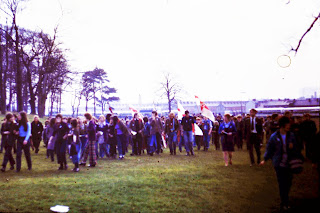 Dr Gareth Mulvenna [for Issue 14 of The Ulster Folk]
The trouble with researching the history of the Troubles in is that many people are still searching for grand narratives - both theoretical and ideological. One of the casualties of this approach is that we miss the micro-history; the social history and the lived experience. The controversy has made capturing oral history a much more difficult but not impossible task. Over the past year I have been interviewing and recording the stories and memories of a number of men from Protestant working class areas of who were teenagers at the beginning of the 1970s. Many of these young men were members of loyalist ‘Tartan’ gangs.


There has been much confusion over the Tartans and their place in ’s recent conflict. Many people have mistakenly rested on the assumption that these groups of young men were influenced by the Scottish pop group the Bay City Rollers. I was disabused of this notion quite early on in my research – the Rollers came to prominence in the mid-1970s when the Tartan phenomenon had largely died off. Moreover there would not have been many teenage boys from working class backgrounds listening to such a saccharine pop group. What has emerged through my research is a fascinating ‘hidden history’ of Protestant working class youth subculture in Belfast and the gang culture, which existed on the backstreets that made the transition to paramilitarism much smoother than it should have been for some young men.
Throughout early May 2014 one of my interviewees Robert ‘Beano’ Niblock, an ex-Red Hand Commando prisoner and playwright, had his second major play ‘Tartan’ staged in four venues across Belfast, eventually playing to 1800 people. The production was set in 1971-72 and based on Niblock’s experience of being in one of the largest Tartan gangs – the Woodstock Tartan from east – and the malleability of some young men at a time of great social and political crisis for the Protestants of Northern Ireland.
In 1970 Niblock was a fifteen-year-old member of a street gang in east ’s Willowfield area. The gang was called ‘Young Hatans’ but their identity would change in tandem with the increasingly violent security situation in in 1971-72. While previous incarnations of youth subculture such as the Teddy Boys of late 1950s, Protestant working class had the relative abstract of an IRA Border Campaign to trouble their minds. The gangs, which became the Tartans in during the early 1970s often found themselves at the ‘coal-face’ of the emerging conflict. Niblock describes how the changing atmosphere affected the structure and image of the street gang he was in at the time: ‘I think the Tartan movement as a whole, not just the individual gangs, ended up being political in regard to what was going on around us at that time. I neither formed nor joined a Tartan gang. I merged into one from another gang (Young Hatans). The only difference in both was the wearing of scarves and of course how we were known. The name (Woodstock Tartan) was easily chosen as it identified geographically where we came from - Young Hatans didn’t.’
Although the Tartans were a largely self-governing force in the areas in which they existed there were figures inside both the emerging paramilitaries and forces of loyalist political opposition that took a keen interest in their activities. Men such as William Craig, former Stormont Minister of Home Affairs during the Civil Rights era, saw the potential of the Tartan gangs in terms of providing a large-scale and threatening visual presence during political rallies. Ulster Vanguard, formed by Craig in February 1972 as a protest against the pro-Faulkner wing of the Unionist Party, staged massive opposition rallies during that year. One rally in particular which attracted between 60-80,000 loyalists was held on 18 March 1972 in Belfast’s Ormeau Park (see picture) and could be considered the visual apex of Protestant discontentment at the political and security situation in Northern Ireland. At the rally Craig stated that ‘We must build up the dossiers on the men and women who are a menace to this country because one day, ladies and gentlemen, if the politicians fail, it may be our job to liquidate the enemy.’ In the crowd, and marshalling the speakers at , were the Tartans - coming from all across to hear the latest loyalist messiah. In the Sunday News the following day a reporter described the intoxicating atmosphere at the rally as being like ‘…the Twelfth, a family reunion, the football match of the year, all rolled into one.’ The report further stated that:
‘Small knots of Tartan gangs clustered here and there, resplendent in their tartan scarves, bleach-faded denims and big boots’.
“I came to show I’ll be shoulder to shoulder all the way,” said one lad of 14. “Not another inch.” The boys around him echoed his pledge. “I came here because my friends came,” said a boy of about 10 with startling candour.
The increase in republican violence and the threat of the proroguing of the Stormont Government in 1971-72 created a menacing atmosphere in which the aggression of frustrated young men found an outlet in serious street disorder, intracommunal policing and eventually paramilitarism. Historical accounts of the Troubles have failed to highlight the strong power and influence of subcultural groupings and violence in . The emergence of the ‘second wave’ of loyalist paramilitarism in 1971-74 was deeply reflective of the social and political mood of ’s Protestant working class at the time. By 1972-73 many of the young men involved in the Tartan gangs had either drifted off into domestic life or, as in the case of the Woodstock Tartan, merged into a paramilitary grouping such as the RHC. While there has been no absolute consensus on how the Tartans adopted the term for their gangs it is important to recognise and remind contemporary readers of the various social and cultural factors which were important in forming and propagating a subcultural identity among young men in ’s Protestant working class communities which often found an expression in casual violence. What emerges is a hidden history of the violent 1970s in .
Dr Gareth Mulvenna is currently writing a book on the Tartans and the early history of the UVF and Red Hand Commando in Belfast entitled From Young Citizens to Volunteers (Liverpool University Press, 2016) and has co-edited a collection of essays on Ulster Protestant politics and culture with Dr Paul Burgess (University College Cork) entitled The Contested Identities of Ulster Protestants (Palgrave Macmillan, 2014)