Gesendet: Mittwoch, 27. August 2014 um 15:52 Uhr
Von: "Hermann Glaser-Baur" <Flaxmill@gmx.net>
An: MH <flaxmill@gmx.net>, "Wera Richter" <wera_richter@web.de>, "Reiner rf" <ra_frankl@gmx.net>, "Roisin IngleIrihtimes" <roisin.ingle@gmail.com>, eamonn <eamonderry@aol.com>
Betreff: Open day and fest 2014
Dear friends in the media,
This comes late but it comes and should find you interest.
Hoping to see you at the mill on Sept. 13th.
love Marion
p. s.
a few mails slipped our before we could complete them, sorry. Here is the "real thing".
M.
Posted by theulsterfolk at 09:05 No comments:

LOST DIVISION: REMEMBERING THE 10th IRISH IN THE GREAT WAR 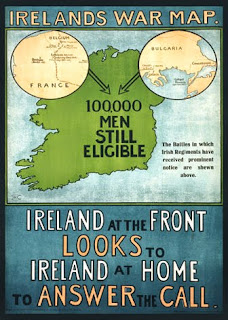 By Dr Gordon Ramsey for Issue 15 of The Folk

In the centenary of the Great War, there has been a reflective mood in , and particularly in , where the war formed part of the complex train of events leading to the establishment of the modern state.  Much of the commemoration has focused upon the 36th Ulster Division, raised from the Ulster Volunteer Force, whose sacrifice on the has entered loyalist folk memory.  The story of the 36th was told in a book published in 1922 by , a Dubliner who had served on the divisional staff.  Falls’ book is still in print, and the 36th is widely commemorated on murals in loyalist working-class areas throughout .

In the years following partition, there was a deliberate forgetting of the role of Irish Catholic soldiers in the war.  Their sacrifice seemed to fit neither loyalist nor nationalist narratives.  In the years leading up to the centenary, however, there has been an increasing focus upon the 16th Irish Division - recruited largely from John Redmond’s Irish Volunteers, and as politically committed to Home Rule as the men of the 36th were to opposing it.  The story of the 16th has been told in books such as Terry Denman’s Ireland’s Forgotten Soldiers, and the publication by a Falls Road community group of The 6th Connaught Rangers which recounts the history of the battalion of nationalists that served with the 16th.

The 36th and 16th Divisions have come to be seen as emblematic of loyalist and nationalist contributions to a common struggle, and of the common ideals that underlay their opposed political positions.  This use of remembrance to find common ground was most evident in the opening of the Island of Ireland Peace Tower on Messines Ridge, site of the battle where the 36th and 16th  Divisions went into action side by side, the bonds they built being most poignantly enacted when loyalist soldiers of the 36th carried the body of Tom Kettle, nationalist MP and officer of the 16th, from the battlefield.  The was opened in 1998 in a highly symbolic act of remembrance by the Queen and Irish President Mary McAleese, with representatives of both British and Irish armed forces taking part in the ceremony.

The focus on the 36th Ulster Division and the 16th Irish Division is representative of loyalist and nationalist contributions to a common cause has been positive in many ways, but an unintended consequence seems to have been the total forgetting of the first Irish Division to be formed, and the first to be committed to action: the 10th Irish Division.  The 10th was formed in the early days of the war as part of ’s ‘New Army’.  The 10th was unconnected to political militias, and its recruits were a widely assorted bunch, coming from every and beyond.  The division attracted large numbers of Belfast loyalists who were not prepared to wait for the organisation of the 36th, fearing the war would be over before they got to the front, as well as nationalists who produced unofficial green flags that were carried on parade and into battle along with regimental colours.  Whilst most recruits were working men, D Company of the 7th Royal Dublin Fusiliers was recruited at through the IRFU, and consisted of barristers, solicitors and others from the middle-class professions.  Whilst ‘Dubs’ were popularly known as ‘the old toughs’, D Company was known as ‘the toffs in the toughs’.  In contrast, Bryan Cooper, an officer from who published a history of the division in 1918, noted that many of those who adapted quickest to the demands of life in the field were Irish Travellers, a group whose contributions have rarely been recognised north or south of the border.  Recruitment was boosted by a sizeable contingent from , many of Irish descent.  Cooper noted that many of the English were miners and militant trade-unionists, and officers had to earn their respect.  This they had in common with a large contingent of dockers who had been blacklisted by employers for their loyalty to Jim Larkin during the Dublin Lockout of 1913.  Whilst for the dockers, and many others, enlistment was an escape from unemployment, the former miners, like ‘the toffs in the toughs’, took a significant paycut in order to serve.  The officers of the 10th were as diverse as the men, former Indian army officers, retired officers from regular Irish regiments, young men from Trinity University Officer Training Corps and officers of the Royal Irish Constabulary all played a role.

On August 7th, 1915, whilst the 16th and 36th were still training on home soil, the 10th Irish Division transferred from troop-carrying ships to barges, to launch a beach assault alongside the ANZAC’s (Australia & New Zealand Army Corps) in Suvla Bay - an attempt to break the stalemate on the Gallipoli peninsula, where Churchill’s plan to seize the Dardanelles Straits and open the way to support Russia  in the Black Sea had bogged down against fierce opposition by the tough and well-trained Turkish army.  They were not the first Irish troops to enter the campaign.  Regular battalions of the Royal Dublin Fusiliers and Munster Fusiliers had been decimated in the initial landings.  The 10th fared little better.  Cooper describes how they fought in the hot arid conditions, often without water, how assaults against Turkish machine-guns sometimes led to whole platoons just disappearing, and how ferocious fighting at close quarters ultimately led to the division losing 75% of its original strength - Dublin dockers and Belfast loyalists, English miners, Irish Travellers and rugby-playing ‘toffs’ perishing together amid the dust and flies.  The desperation of the fighting is illustrated by the story of Private Wilkin of the 7th Dublins, who caught five Turkish grenades and threw them back at the enemy, before the 6th blew him to pieces.  The operation commander, Sir Ian Hamilton, noted that the division had proved wrong the idea that no military unit could remain effective once it had lost 25% of its strength - the spirit of the 10th never broke.  The remnants of the 10th Irish Division was withdrawn from Gallipoli to the Greek at the end of September 1915.  The entire allied force had withdrawn by the first week in January, the ambitious mission having ended in total failure despite the enormous sacrifices made.

Cooper ended his book with the phrase: ‘ will not easily forget the deeds of the 10th Division’.  It seems he was wrong.  Whilst the victory at Gallipoli formed the foundation of modern , and the memory of the ANZACs became central to the national identities of and , in the sacrifice seems to have faded from the memories of both north and south.  Perhaps this is because the 10th did not fight on the Western Front, seen as central to images of the Great War.  Perhaps it is because the strange hodge-podge of loyalists, nationalists, travellers, trade-unionists and what today’s Irish regiments call ‘plastic paddies’ which made up the 10th did not fit anyone’s political narrative.  It seems even when we remember shared sacrifices, we still like to see a clear division between ‘us’ and ‘them’.

We should remember the 10th, however.  Their sacrifices were as great as any made on the Western front.  Their motives were no more or less noble than any other division.  After their withdrawal from Gallipoli, the division was redeployed to the Balkans, and fought the Bulgarians in Kosovo, a theatre familiar to today’s Irish Army and Royal Irish Regiment, before going on to face the Turks again in .  In many ways, the mixed composition of the division was similar to the Irish regiments of today, which recruit from , the of , , and beyond.  And they are a reminder that there is no clear division between ‘us’ and ‘them’ - indeed, a close look at the histories of the 36th and 16th Divisions shows that they too rapidly became ‘mixed’ formations after the casualties of the Somme.  There are some signs that memories of the 10th are being rekindled.  Cooper’s story of the Division at Gallipoli was republished in 2003, and a 2006 book, Field of Bones, by Philip Orr has explored the experience of soldiers from the division both in battle and after the war ended.  This is to be welcomed.  Regardless of their origins or motivations, the men of the 10th fought together, and way too many of them died together. They deserve to be remembered.

Posted by theulsterfolk at 15:38 No comments: