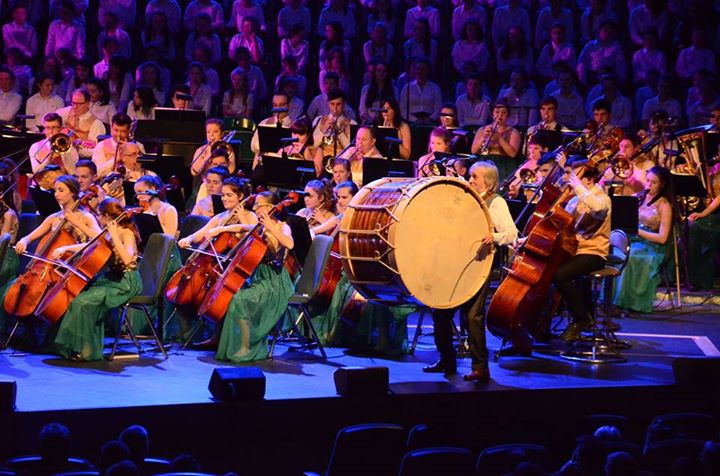 
2016 is set to be a big year for commemoration to mark the centenary of Easter Rising and Battle of the Somme. There can’t be any doubt about the massive significance of both events and, as we ponder the valour and the futility, the manner of commemoration will be under the spotlight.


On New Year’s Day the Irish Government straight away set the stage for 2016 with the Peace Proms at Dublin’s impressive National Convention Centre. The concert by the Cross Border Orchestra of Ireland was sheer entertainment: superbly choreographed and impeccably delivered by the orchestra; guest soloists, dancers and pipers.  This was a stage show clearly ‘orchestrated’ to emphasise government strategy for a year ahead of sensitive all-inclusive commemoration.

On stage with the orchestra were a choir of 300 spirited children, carefully selected from across Ireland to include pupils from state schools in Northern Ireland: in other words to include Ulster Protestants. I was also engaged as a Lambeg drummer for this event, as was Michelle Johnston and two of her Scottish Highland Dancers. As on two previous occasions when the orchestra had engaged me, for concerts in Rome and at the Royal Albert Hall, my Lambeg was highlighted in a sprightly rendition of King Billy’s March.


Ireland’s culture minister with a good Ulster name, Heather Humphreys, gave an impressive speech at the start of the concert and eloquently articulated the government’s determination that the 2016 Commemorations will be as much about the sacrifice of Irish soldiers at the Battle of the Somme as it will be about the Easter Rising. Yes, the juggling skills of Irish politicians are set to be tested.


On the one hand there is the clear desire by many across the island of Ireland to reignite the ancient passion for battle: to bring to completion the plot of the 1916 martyrs. In the same vein, the same patriots still resent the enormous role of Irish soldiers in Britain’s wars. They may fear they were upstaged on New Year’s Day and perhaps they were.


On the other hand relationships across community, across border, and across the Irish Sea have never been better: relationships that are crucial for economic and social stability.  No one, other than those who seek glory or political opportunity in rekindling past divisions, will want to be blamed for spoiling that plot.


And of course the challenges for 2016 will not end with Easter Rising and Somme centenary commemoration. On top of all that there will be the EURO 2016 football finals in France in June and, amazingly, both the Republic and Northern Ireland have qualified. They have managed to avoid each other in the first stages of the competition in France but the excellent character of both teams could see them both advancing and potentially being drawn against each other.


The grand finale of the Peace Proms at the Convention Centre on New Year’s Day was a rousing rendition of ‘Ireland’s Call’.  I was busy blattering away on my Lambeg drum for this, so I couldn’t hear too much, but it looked as if all 2,000 audience members were standing up and blasting out the words of this emotive anthem with as much volume and passion as Irish rugby fans at the Aviva Stadium.  ‘Ireland’s Call’ written by Phil Coulter, was originally designed to be appropriate for rugby fans from both traditions, and it seems to work.


Football fans don’t have that luxury however as there are two national teams, representing the two political entities on the island, and there has historically been serious animosity between the two sets of fans.


As a Northern Ireland football fan I would have to say that I would be optimistic about positive developments this year. I would be hopeful that the good-will established on New Year’s Day will rub-off and help transform the somewhat venomous rivalry of the past into good-natured sporting rivalry in 2016.  The significance of this could be massive and even exceed the hopes and goals of political leaders such as Minister Humphries.


In the meantime the Cross Border Orchestra of Ireland, with brilliantly dynamic new conductor Greg Beardsell, will continue to warm the souls of audiences while spreading its positive message around the island. Watch out for their Belfast concert at the Odyssey on February 28th.


So, here’s hoping for an exciting and peaceful revolution in 2016.