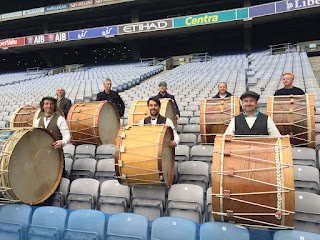 I had never been to a GAA match before and  the very first time I did I got to play on the pitch at :  ’s spiritual home for all things sporting, cultural, historical and even political.

As a professional performing artist I perform in all kinds of situations and only on rare occasions would I consider turning down a gig due to problems I might have with the ethos of an event. But, when I was contacted recently to perform my Lambeg drum in for a commemoration of 1916: in after a GAA match, I did hesitate.

The organisers, Tyrone Productions, wanted me to bring along a few other Lambeg drummers and so a fair bit of discussion took place among my fellow musicians about potential sensitivities relating to this event.

It was explained to me, by Tyrone Productions, that this would be a spectacular commemoration of Irish history, from ancient times up to 1916. It was to include reference to the crucial role of Irish soldiers in the First World War as well as the Easter Rising. They wanted the epic performance to address all traditions on the . The symbolism of the Ulster Lambeg was therefore significant.  But of course with the event being on the 24th of April, the exact centenary anniversary of the 1916 Easter Rising, a significant element of the show would relate to this. This was where I hesitated.

Growing up as an Ulster Protestant I was very aware that my forebears, on both sides of my family, had signed the Ulster Covenant in 1912 and fought for the British military in World War One. At least one of my grandfathers was in the UVF, as were several of my great uncles. As a child I heard many of the stories of the time period: the pride and honour felt at the courageous stand taken as well as the excruciating grief when telegrams were delivered to say sons would never again return home.

With recent centenaries in I have naturally reflected on the events that older generations of my family spoke of with pride and passion. These commemorations also allowed me to reflect on what the deeds of one hundred years ago meant for us today. They also allowed me to reflect on what it possibly meant for Irish nationalists. I came to the realisation that for the most part, the common folk on both sides genuinely believed they had no alternative but to fight for their freedom and for the freedom of future generations.

For thousands of young Irishmen this meant fighting and dying alongside British soldiers in World War One: in the same pursuit of the same freedom.

Surely there was validity in John Redmond’s belief that The British Establishment would justly reward the sacrifice of during WW1?  Surely Home Rule, as a stepping stone to independence, would have been inevitable in the short term regardless of the Easter Rising? Perhaps there is validity in the belief of many that the Easter Rising was a futile waste of precious human life, in the same way as many have perceived the of the ?

On the flip side though, especially for descendants of the participants and supporters of the Easter Rising, it is easy to understand their need to commemorate the bravery of the 1916 martyrs. Centenary commemorations of the 1916 Easter Rising are clearly as necessary and as poignant for Irish Nationalists, as the Signing of the Ulster Covenant was for Ulster Unionists. Remembering the human sacrifice in then becomes as essential as remembering the human sacrifice at the .

Yes, commemoration of major events one hundred years ago should be encouraged: they can help us understand the significance and impact of certain historic defining moments. To date, centenary celebrations in both and the Republic have been mostly carried out with dignity and respect for the other tradition.

With this in mind my fellow Lambeg drummers and I decided to accept the offer to perform at the event.  From many previous experiences in different parts of the Republic, I was confident that we would be treated with total respect and that we would be recipients of the renowned Irish warmth and hospitality.  That’s exactly how we were treated.

We did have one awkward moment when there was a clear clash of cultures. When we first arrived at Croke Park car park on the Saturday morning for rehearsals, a couple of my drumming friends decided to have a quick practice: as is normal procedure for any musician prior to rehearsal or performance. Some nearby residents however hurled their vocal disapproval  from upstairs windows and phone calls of complaint were immediately made to the management of . We were somewhat taken aback by this reaction. If it had been really early in the morning: like before 8am, it would have been more understandable. But, it wasn’t: it was at least 8.15am by this stage. Someone at however told us that we shouldn’t be taking these complaints personally as it wasn’t just the Lambegs they didn’t like: the local residents didn’t like the music of Garth Brooks either.

As part of the spectacular show on the pitch, following the GAA League Finals, our role was to participate in the “drumdance” section: a dramatic stand-off between drummers and dancers. The dancers were absolutely brilliant. You can view this part of the show: which was conceived, expertly choreographed and directed by Ruan Magan, on:  https://www.facebook.com/willie.drennan.73.

The end result was a very positive experience for me and fellow Lambeg drummers.  Hopefully, our contribution at the , “Laochra – GAA 1916 Commemorations,” will be viewed as another  small step forward for the new common Cause of 2016:  for the promotion of mutual respect, understanding and harmony among this island’s differing traditions.