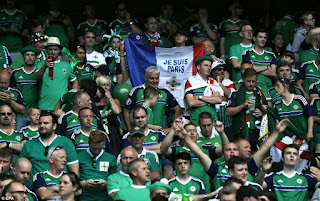 It all began prior to Northern Ireland’s first game against Poland in Nice on June 12th. Northern Ireland and Polish fans celebrated together in a demonstrative display of human bonding and sharing of joy. Okay Poland won that game 1-0 but the really big result was a tremendous victory for both sets of fans and the game of football. And if there is one international sport that needed such a victory it is this one.


A great start and it gets better. There was a tragic moment however as a young Northern Ireland fan, Darren Rodgers, sadly lost his life as a result of an accident following the game. Northern Ireland fans demonstrated their grief by laying football shirts, scarves and flags at the spot where he fell to his death. Polish fans and other fans also contributed to this memorial: and this included Republic of Ireland fans that were in Nice at the time. Images that went out around the world showed a large Irish tricolour in the middle of the various football related displays of tribute. 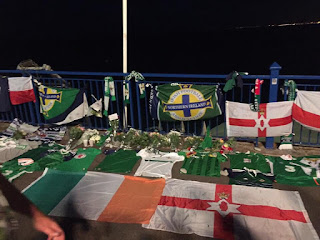 Darren Rodgers was 24 years old and Northern Ireland fans planned to mark the young man’s death with a round of applause on the 24th minute of their next game in Lyon on June 16th. In advance of this however, on June 13th the Republic of Ireland had a game against Sweden. On the 24th minute the Republic’s fans also paid a tribute to the young man from Ballymena by singing “Stand Up For The Ulstermen”


To people from outside Ireland and the British Isles it is difficult to explain the significance of this. It’s not that long ago that there were serious tensions between Northern Ireland and the Republic as a result of the ‘Troubles’. This tension between the two national football teams has also recently been exasperated through disputes over players born in Northern Ireland who opted to play for the Republic instead.   However, following personal experiences earlier this year, performing as a folk musician at events in Dublin Convention Centre and Croke Park, I had predicted that the interactions between the opposing Irish fans in France would all be positive and had great potential to transform previously entrenched mindsets. Yes, this is the year of centenary commemorations for the 1916 Easter Rising.  Perhaps what I didn’t quite predict was the scale of significance of this.


As I write on June 28th, , four days after the EU Referendum result, Northern Ireland is still being bombarded  with tales of pending doom.  During this referendum debate and ever since, the government campaigners have threatened that there could be damage to the Peace Process and there could be installation of a permanent hard border across the middle of Ireland to divide the EU from the UK. Well I’m sorry politicos; media pundits, internet warriors and others who seek and thrive on division: in Stade de France on June 13th there was a pivotal moment that changes everything. We, the people from the north and south of the island of Ireland; unionists and nationalists, Protestant people and Catholic people: we all won a tremendous victory. The war is now officially over and everyone should try to get used to it.


The positivity for Northern Ireland continued in Lyon with a game against Ukraine on June 16th. The fans once again mingled in a jovial spirit with fans from Ukraine and we even won the game 2-0. There was another tragic death at this game as 62 year old Robert Rainey from Belfast died of a heart attack. Again, at following games both sets of Irish fans paid their respects to the passing of their two fellow football fans.


By the time I arrived in Paris for the game with Germany it was common knowledge that fans from Ireland, north and south, were the best fans in the world. I may be biased but I do think Northern Ireland fans slightly won the honours due to incessant singing, even when losing the game: and one particular song about Will Grigg that went viral. The lyrics claimed that “Will Grigg’s on fire, your defence is terrified”. The fact that Will Grigg was just a Northern Ireland substitute who hadn’t kicked a ball in France, and was unlikely to, seemed to be understood by Parisians who didn’t even follow football. It gave them insight into not only our spirit but our sense of humour and they liked it.


When fans took to the streets of Paris mid-morning, in advance of the 6pm kick off, we received constant positive response from the people of Paris. They were full of smiles and constantly stopped to initiate conversations with us: they honked their horns and waved at us out of car and van windows. I was shocked. I had previously visited Paris and other parts of France on numerous occasions and constantly experienced very warm, friendly and helpful people. But this really was something else and at a whole other level.


A few of the French people, who didn’t follow football, didn’t seem to realise that there were two Irish teams in the competition: and some of those who did know this, still went out of their way to ask us why this was and what exactly the difference was between the two.  It was very challenging to try to explain this to Parisians: especially in a fusion of broken English, broken French and Ulster Scots. I doubt that I or any of my friends were able to make them any the wiser. They didn’t seem to care and we really didn’t care that much either. From their reaction it was clear that we had brought joy into their day and of course likewise, they brought great joy to us.


In mid-afternoon a dozen of us were slowly making our way on foot to the stadium, a few miles away, when we came across a parade of several thousand German fans also making their way to the match. There was a whole solid army of them in team colours and waving German flags. Instinctively we made a b-line for them and joined in. The crack was absolutely brilliant. We tried to sing their songs and they sang ours. We all shook hands and had friendly banter. At one point we went though a very long tunnel and the thousands of Germans went for it and drowned us out. When we looked behind all we could see was wall to wall people, as far as the eye could see, and they were making some noise.  It was one of those memorable, magical moments. 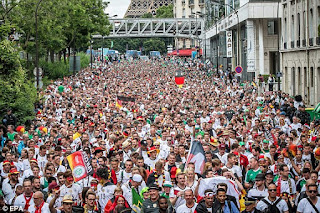 In the stadium we were mostly segregated and as usual the Northern Ireland fans dominated the singing: before, during and after the game. Thousands of Northern Ireland fans remained in the ground for at least 30 minutes after the game jumping up and down, singing and chanting in jubilant celebration of the fact that the world champions had only managed to beat us one nil. We were also making sure we got our money's worth. 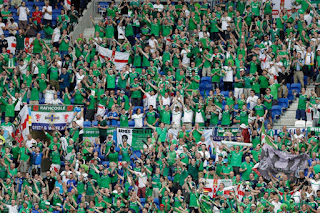 The Green and White Army


Later that evening and into the wee small hours we continued to celebrate Northern Ireland’s tremendous victory with Germans, French, Southern Irish, Austrians and even Americans. They were all happy to share in our celebration especially as it seemed the rest of the world now knew the lyrics and dance routine associated with “Will Grigg’s on Fire”.


We Northern Ireland fans discussed this the next day amongst ourselves. We were overwhelmed as we had just been out doing what we do best: having a bit of crack.  But for some inexplicable reason the whole of Paris seemed to be treating us like super stars. They continuously approached us to chat and get selfies taken with us.  Personally, I think they liked the idea that we were all seemed a wee bit daft.


Just realised I haven’t, as yet, mentioned the players and the manager of Northern Ireland’s team. They were absolutely amazing: their spirit on the field easily matching the spirit of the fans off the field. Last night thousands of fans welcomed them home in a 'tremendous victory’ celebration in Belfast.  We have now been knocked out of the tournament, by Wales, but last night it looked as if we had actually won the tournament.


I was particularly pleased that we had had such a positive interaction with the Germans as I was conscious of the fact that I was heading off to Germany just over a week later. I will be playing with my band at a folk festival in Dortmund [UZ- Pressefest ] from July 1st to July 3rd. That’s right I will be performing on stage in Germany exactly one hundred years, to the very day, after British and German soldiers slaughtered each other at the Battle of the Somme in 1916.


Members of my family fought in both world wars against the Germans.  So this upcoming event just might be another one of those pivotal moments.  2016 is transpiring to be quite the year.