The Liberal Politics of Adolf H....r 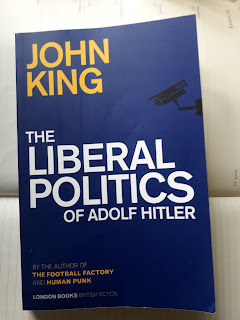 I highly recommend you buy a copy of this new book by John King before it goes underground.

For fear of getting arrested for aiding and abetting a book entitled 'The Liberal Politics of Adolf Hitler' I have deliberately not used Hitler's full name in the title of my little piece. I would like to fend off the thought police for as long as I can. I am only a third of the way into this book and Adolf H....r and the N...s barely get a mention. It doesn't seem to be really about the Austrian and his cult followers at all. And that is a relief, as only recently a Scottish comedian was prosecuted for making fun of such types.

In this Orwellian novel King imagines the UK and the United States of Europe (USE) in the future. The USE has become a totalitarian dictatorship where 'power is fully centralised' and its citizens have absolute obedience and devotion to this almighty establishment. A system of dependency has been manipulated and molded into perfection.

In this 'New Democracy' history has been re-written and appropriate news is daily fed to the devotees. There are of course dissenters who live beyond the controlled areas. They seem to be tolerated as long as they keep their mouths shut. Dissenting voices are sought out and eliminated.

The real scary thing is that we are in it. Yes even though the UK voted to leave the EU in 2016, in this novel, London and other major British cities and still a core part of it all. These USE zones are cordoned off from the hinterlands, where the common folk still live in deprived early 21st Century conditions.

This novel by John King was published in 2016 and I'm not sure if it was before or after the EU Referendum of June 23rd. The implication here is that it doesn't really matter: that that vote was really irrelevant. Almost two years after the referendum we do remain uncertain if we are actually going to be truly independent of Brussels anytime soon, or not. So perhaps we do need to give King's projections serious consideration?

The good and the great are doing everything within their colossal power and wealth to overturn the democratic wish of the electorate. Censorship of speech and expression is increasing by the day. Subtle, and not so subtle, intimidation of dissenting voice is rife. Many people are keeping their heads down and saying nothing for fear of surreptitiously losing work and income. Or at least, for fear of getting sent to Coventry.

Okay, Orwell's '1984' masterpiece was published in 1949. His predictions of a totally controlled super state 35 years down the road were a wee bit off. I wonder though, because his novels were so popular, did this make enough people aware of what was going on and hence slow down the process?

King is playing it a bit safer and is not saying exactly when his projections might come to fruition. With the pace of how things are moving in Europe, including Britain - towards the destruction of individual nation states, distinct cultures and independent mindsets - the aims of the EU might all fall nicely into place, sooner rather than later.

On the other hand though if King's writings become as popular as Orwell's we might still be able to preserve the UK as one of the last bastions of democratic,free-thinking, independent society. Start spreading the word.

The Liberal Politics of Adolf Hitler' is available, for now, on Amazon.

Oh and by the way. Before I get to the end of this novel I expect to learn about the exact connection that Adolf H....r has to it all. I will let you know, so watch this space. And if this space vanishes you will know they are on to me.