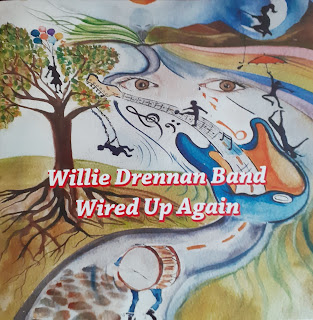 Wired Up Again is in a music category of its very own. It is not Folk, Trad, Blues, Rock, or Country Rock. There are traces of all of the above and yet it is something else. This has its pros and cons: a good thing or a bad thing depending on your point of view.

What box does it fit into?   If anyone can find a suitable box do let us know. We might be able to get some radio airplay. Only joking. No mainstream radio station will know what to do with this.

4/ Over The Hills and Far Away

6/ No Whiskey In The Jar

9/ Til The Cows Come Home 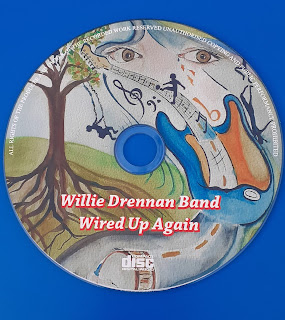 All songs are originals: written by McClean or Drennan with the exception of track 7. My Heart was written and sung by Derek Montgomery and is definitely in a whole other category of its very own.

The airs of tracks 6 and 12 are traditional, although you'll not have heard anything quite like this arrangement of the Black Bear anywhere else.

Lots of normal music instruments on this album. But do expect the unusual: such as musical saw and Lambeg drum.

All material arranged by Drennan/McClean

Recorded, mastered and produced in The Doghouse Studios by David McClean.

All live concerts have been banned.

So, the only way to let folk know of my new product is through word of mouth and online social media: for now.

When is the Official Willie Drennan Band: Wired Up Again Launch??

Where can Wired Up Again be purchased?

Or paste this link: https://www.williedrennan.org/store.

That's when they are open. When they are allowed to open again, get there early to avoid the queues.

For lyrics and details of the 12 tracks go to www.williedrennan.org and click on Wired Up Again on top panel. Or copy and paste this link below.

Reg C: “You might be the Wired Up Band to some but you are all wired up to the right terminals. Keep 'er lit.” Reg Crozier.

“The album begins with,’Folkybilly Rocknroll’ which is akin to supercharged folk music as in harpist meets punk bluegrass with an overlay of Slade for good measure.

Much of the music here is a melange of rock and folk but interestingly the rock input veers towards 1970’s Britpop.

So I hear echoes of the influences on people of a certain age ,of which I am one and I suspect so also is Willie, bands such as T-Rex to give just one example .

An exception to that homegrown fusion however is,’Boom Boom Baby’ which has echoes of Mississippi Delta blues and the energy of Elvis when he was still known as ,‘ The Hillbilly Cat’.

Overall the result is a successful fusion of sound that is personal and regional and ultimately universal.” Alister J McReynolds August 2020. 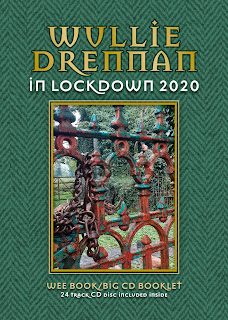 For details see www.williedrennan.org.
Also read more about Wullie Drennan in Lockdown 2020  in The Ulster Folk http://www.theulsterfolk.com/2020/11/wullie-drennan-in-lockdown-2020.html
Posted by theulsterfolk at 01:57