The Immortal Rabbie Burns in 2023. 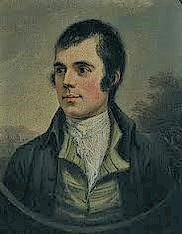 Rabbie Burns is often referred to as the Immortal Bard or at least the Bard of Immortal Memory. What would he think of the state of the world today - in January 2023 - exactly 264 years after his birth?

Rabbie was a complex, fiercely independent free-thinker. So, obviously there will be differences of opinion as to what he would think, believe and say - should he just happen to appear back amongst us in this present day.

Well, I've been fascinated by the works of Burns since I was a teenager and I reckon that gives me some credentials to tell you what I think.

He constantly sought the truth. He cherished freedom and the rights of individuals to question and challenge authority. I firmly believe he would do exactly that if he was alive right now.

Read more »
Posted by theulsterfolk at 04:45 No comments:

Back To The Free World

Britannia once ruled the waves.

The Republic of Ireland was once a Free State.

It is now a vassal state of the Global Deep State.

Read more »
Posted by theulsterfolk at 00:45 No comments: 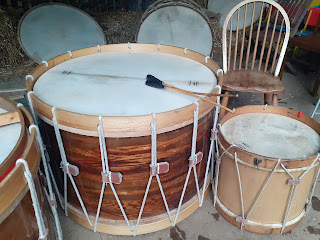 Whatever happened to this famous Lambeg drum that once belonged to Kate Bush?

Last night I was invited to appear on BBC's Good Morning Ulster  - scheduled for 8.50 am this morning.

I agreed to talk on BBC's radio show this morning as I was intrigued by the story. It was about the story that Kate Bush had purchased a Lambeg Drum from William Hewitt of Sandy Row, Belfast. She wanted one of the “huge drums” that she had seen on TV for her songs, 'Running Up That Hill' and 'Cloudbusting' on her 1985 album, 'Hounds of Love'.

Unfortunately Radio Ulster just gave me a very short time to speak before I was interrupted by announcement of 'The Nolan Show'. - whoever Nolan is. They didn't give me a chance to say what I had prepared to say. So I'm putting it down here instead.

The story of how Kate Bush, from Kent, came to purchase a Lambeg Drum from Billy Hewitt of Sandy Row, is brilliantly told, perhaps with some artistic embellishment, by Stuart Bailie and Mike Edgar on a YouTube video produced by the Oh Yeah Centre.

These are important details as I suspect there was a huge breakdown of communication due to the cultural differences.

The other wee detail that stood out to me on the video was that when Billy Hewitt was speaking to Mike Edgar, who was negotiating the making of the drum for Kate Bush's management team, he referred to Kate Bush as 'the wee girl Kate who wanted the Lambeg'.

This is relevant because I am questioning if Kate did actually purchase a real full-size Lambeg drum. And if she did purchase a real Lambeg was it used for the recording or in any live stage performances?

I was living in Canada in 1985 and wasn't aware of the Kate Bush Lambeg story at that time. But over the years several people mentioned the story to me. Each time I heard the story I wondered what happened to the famous Lambeg drum owned by Kate Bush? In the same vein as Lambegs owned by famous Lambeg drummers, or famous drums that had repeatedly won drumming matches at  Markethill or Ahoghill, I reckoned this drum would be worth a lot of money. It was all very mysterious how it seemed to have vanished into obscurity.

The fact is that a real full-sized Lambeg drum is about 3 foot one and a half inches in diameter, just over two foot wide and weighs about 40lbs. I've no idea about what the equivalent of those measurements are in the metric system used by some folk today – but in short: the Lambeg drum is very big, very heavy and very loud.

In the video, when Billy referred to Kate as the Wee Girl Kate, it is assumed that he was talking 1980's Northern Ireland lingo when it was still politically correct to refer to a young woman in her late teens or early 20's as a wee girl. But, I suspect Billy actually did believe he was making a very small drum that would be suitable for a young teenager.

The reason I came to questioning the size of the Lambeg also relates to me finally getting around to watching 1985 videos of Kate Bush singing 'Running Up That Hill'. I have to assume it was the original recording that was used and I couldn't hear familiar sounds of a Lambeg drum - as I know it.

There a single rope drum played on stage and there are white fluffy cloud-like shapes painted on the drum. Could this be the drum made in the drum shop on Sandy Row for Kate? It is played in upright position like a classic rope drum with regular drum sticks. The Lambeg drum is played with hard but flexible canes. The canes are beaten sideways and they are a major factor in the distinct Lambeg sound.

Kate Bush's song, performance and production are all of the highest excellence. All I am saying is that I could not hear distinctive Lambeg tones, rolls or patterns of rhythm. The musical piec is powerful enough without a Lambeg.

The reason why this story is coming to light again, just now, is apparently because Kate Bush's 'Running Up That Hill' features in a currently popular Netflix series.

I don't want to throw a spanner in the works and I am definitely not the sort of person who would normally allow the truth to get in the way of a good story – and this is a good story.. I am coming to think that there is an even bigger story here though.

I think there there is opportunity here for the BBC to get into some real investigative journalism, just like it used to back in the good old days, and find out what ever happened to the famous Kate Bush Lambeg drum - if indeed there ever was a real one. Video footage, or even a photo, would be helpful in getting to the truth

Some folk might say, “why would anyone care”? Fair enough. I'm sure Kate Bush doesn't care. I care however because BBC asked me to comment and didn't allow me time to say what I needed to say on the topic.

Posted by theulsterfolk at 10:56 No comments: