Why I Busk
TEXT IAN MCPHERSON
I began busking instead of signing on the dole. The weather was good, so I headed into town with my guitar and after three hours, came home elated by the response I got from Joe Public.  Two days later, I went back. 'This will tide me over for a month or two, at least until winter,' I thought. Nearly five years on, I'm still to be found, guitar in hand, 'The Music Man', as some folk call me.
Read more »
Posted by theulsterfolk at 13:36 No comments: 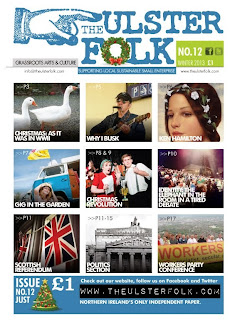 The Flag for Northern Ireland?

From Issue 11 of The Ulster Folk
By Paul Stewart

It can be seen everywhere yet not everyone is conscious of it or even knows what it is: it was considered the one flag that represented this part of the world that everyone could accept. I’m referring to the Irish flag that is a red diagonal cross on a white background or Cross of St Patrick or Saint Patricks Saltire as it has come to be known.

It has its detractors, based mostly on disinformation, after all, equality and shared identify are surely a threat to those with a narrow sectarian agenda. Before passing comment it is better to understand a balanced view of what exactly it is. The Saint Patricks cross is often criticised for having been ‘made-up’ during the 1800 Act of Union and combined with the St Andrews Cross of Scotland and St Georges Cross of England to form the new Union flag.

"Workers Party General Secretary John Lowry talks to David Thompson about a wide range of issues, ranging from sectarianism and the past to internment by remand and state intervention in the local economy. He also says that it’s time to end the current power-sharing system of government and that legal safeguards mean there is no possibility of a return to the sectarian abuse of power seen in the past.” 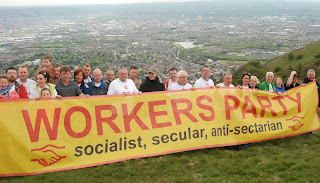 Posted by theulsterfolk at 05:19 No comments:

By Willie Drennan: Editor of The Ulster Folk

On September 18th 2014, a referendum will determine whether or not Scotland will separate from the rest of the UK. While we need to respect the right of the Scottish people to vote how ever they choose on this issue, the rest of who would still remain in the UK after a YES vote, should probably start thinking what that would mean for us.

Read more »
Posted by theulsterfolk at 03:32 No comments: