Irish euroscepticism and the 2014 elections: 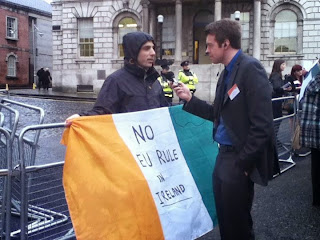 A domestic brew exported for local tastes
Andrew Coffman Smith for Issue 14 of The Ulster Folk
Euroscepticism in the Republic of Ireland is a far cry from the euroscepticism of UKIP or France's Front national, despite growing anti-EU resentment since the 2008 crash and 2010 'bail-out.'
Aside from the dissident fringe of Republican Sinn Fein, most Irish eurosceptics believe it is better to milk Brussels for what it is worth while deriding it every chance they can get. A lot of this is an outgrowth from the practical nature of Irish politics that has taken to heart that "all politics is local."
Irish politics has long been defined not by ideology or issues but by the warm, personable, often-corrupt and petty 'clientelism' of constituency politics. Example: How can you vote against Jimmy? After all he helped fill in that pothole outside your home, pulled a few strings for you that one time ; and was at your mammy's wake!

Ideology further gets pushed to the side in Ireland's European elections as its Single Transferable Vote puts a focus on candidate and not party. Elections and representation by geographic constituency also channels local needs and interests instead of any national expression on the EU.
The possible lone exception to all of this is Sinn Fein. Practically Ireland's only "Eurosceptic" party, Sinn Fein is at best a soft Eurosceptic party. Its 2014 European manifesto plainly states, "Ireland's place is in the European Union but the European Union needs to change." Its euroscepticism doesn't seek to leave the EU but to end the "Brussels power grab" by reigning in the Commission and returning powers to member states.
The EU, in Sinn Fein's point of view, is another means at "putting Ireland first" through securing investment, fairer distribution of farming subsidies, further peace funding and even (somehow) a better deal on the legacy debt of the banks. Oh, and something about Irish unity and a border poll???
2014 will be the first European election since the 2010 bail-out and it's expected, as I write this, that Sinn Fein will secure 3 of the 11 MEP seats – coming in second to Fine Gael's expected 4 seats.  Since the 2009 general election, Sinn Fein has become the third largest party in the south by channeling the public's anger at austerity, emigration and policies of the current Fine Gael-Labour coalition; and before that, the corrupt and incompetent Fianna Fail government.
While many older Irish voters cringe at the thought of ever voting for Sinn Fein, the south's youth largely have no qualms over the political wing of "the boys" from the north. It also doesn't hurt that most of the faces of southern Sinn Fein still have baby fat in their cheeks.
Like UKIP, Sinn Fein also benefits as the protest vote against the rest of the lot. Sinn Fein particularly has a lot to gain from disgruntled, would-be Labour voters who blame the junior coalition partner for every-single-painful -cut. Now bled dry, the public is demanding their pound of flesh for compensation and looks like Tánaiste (deputy primate minister) Eamon Gilmore will suffer the consequences.
Whatever the outcome, it is clear that constituency and disgruntled domestic politics will be the motivating factor in the Irish EU elections than any real manifestation of euroscepticism or pro-Europeanism.
Posted by theulsterfolk at 10:18