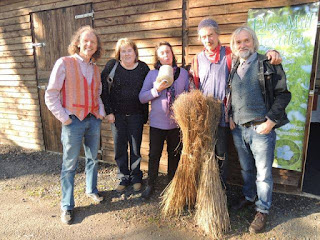 
Willie Drennan’s roots are in the tradition of “Ulster Scots”, the music of Scottish people who immigrated to Ireland in the 18th century. Many years of living in Canada where he worked as a busker and producer of organically grown vegetables and herbs and numerous tours to various corners of the globe have shaped a unique performer who loves to fuse different styles.


His current band consists of a jazz-multi-instrumentalist with love for Latino music, a bass-player who origins from Rockabilly, a master-piper and recently as a special guest a young harpist who plays traditional Irish style.


With this outfit Willie Drennan went for his Germany-debut in the first days of July. They rocked the 60 000 strong crowd at the “UZ-


Festival” in Dortmund, played and sung their way straight into the hearts of thousands of music-lovers.


A master of many instruments (tin whistle, flute, fiddle, banjo, mandolin), Drennan’s real love is that of rhythm. He plays various unusual drums, the bodhran and the “Lambeg drum”.


In an interview with German weekly “Unsere Zeit” he spoke about the “big lady”: “…as far as I can see the Lambeg drum is the end of the evolution of rhythm-instruments in the world. Louder, richer in sound and more high-energy is simply impossible….”


He brought the drum back as a concert – instrument, a tradition which started in the village of Lambeg in the 19th century, hence the name.


More and more songs in Willie Drennan’s repertoire are from his own pen. His recent “No Whiskey in the Jar” – a dig at the corrupt system of banks and multi-national companies – is rapidly becoming a hit in Europe.


To write a press – release about Colum Sands makes for a tall order – to pen even a part of his huge career would inevitably turn into a book.


For over 40 years Colum has been “on the road” and at home on the stages of the world both with his family – band “the Sands Family” and as a solo-artist. More than 50 albums are chronological prove of the County Down man’s endless creativity.


He doesn’t know how many songs he has written, a number of them such as “Getting the loan of a spade”, “Buskers”, “Whatever you say, say nothing”, to mention but few are now Irish- and international folk-classics.


The traditions of Irish music were with Colum from the day he was born in a small cottage in Mayobridge, his father, fiddler Mick Sands being one of the very early teachers.


Despite his “long and winding journeys” to almost everywhere he kept his home in County Down, lives not far from where he was born.


A master at several instruments (fiddle, bodhran, double-bass and guitar), he uses them to accomplish lyrics, and in many songs he uses words and phrases from his home-area and –dialect.


Colum Sands last appeared at the Flax-Mill in 2001. Several attempts to get him back to a Yard-Fest didn’t materialise due to his very busy schedule.


“We’ve been waiting for 15 years to have him back here. His concerts were wonderful experiences and those who attended in 2001 will remember that we had to turn many people away because of an absolute capacity crowd. To have Colum returning in 2016 is all the more exciting because he will join with another folk-giant, Willie Drennan.


“And one more time again we will feature a young local artist who is just about to hit the big stages. Dearbhla Mc Taggart is one of the most talented harpists we have met, at her recent Germany – debut the 14 year old from Dungiven left thousands of music-lovers stunned. Some of them are actually travelling over to see her again.


“Add to that the fact that popular German singer/songwriter Reiner Frankl  is returning to the fest after a break and you have the makings of a superb event.”


The organisers are urging people who want to attend the concert on September 10th to get in touch early. Whilst they recommend to book for the Open Day (full programme will be out within the next few days), the evening event is an “invitation only” affair with no exceptions.

A tailor from Colombia, Ireland’s only female blacksmith, a weaver from Germany

It’s all hands on at Derrylane Flax-Mills as ’s only active linen-weaving-mill prepares to host its 23rd Open Day and Yard Fest on Saturday, September 10th.
“Ireland’s most spectacular private gathering”, as a Dutch journalist once called it, is set to bring visitors from all corners of the globe to the town land outside Dungiven. They will enjoy an unrivalled gathering of the best crafters from these shores; meet designers, artists, spinners, weavers, dyers and textile-workers from far and near.
A “world-premier” of what looks to become one of the most successful documentary-films ever to come from is thrown in as an extra as is a session of Bikram Yoga in the mill garden and many other treats.

Mill owner Marion Baur is delighted with the state of preparations:
“After last year’s absolute capacity crowd and electric atmosphere at both Open Day and evening-concert we had to try very hard to top this. I think we have managed and will be able to please our visitors with an even more comprehensive and exiting display of the best products made here, unique demonstrations of old and new ways of manufacturing, great fun, the best of home-made food and a forum for meeting and exchanging information.
To host a first-time showing of some of the amazing footage, film-maker John Thompson and historian Bruce Clark have gathered during the past year for their new film “Linen People” is honouring for us and of course an extra bonus for our visitors.

The evening concert and session will be the most potent ever. Colum Sands is making an appearance for the first time since 2001 and his fusion on stage with Willie Drennan, German singer/songwriter Rainer Frankl and talented local harpist Dearbhla Mc Taggart has been creating huge interest internationally. At this stage we have booking for the concert from 9 different countries on our list.”

The owner of Flax – Mill has all reasons to be pleased. The full programme for the Open Day which is just out and available from the mill reads like a “who is who” in textile- and other crafts and the melting – pot of crafters, artists, media-people and textile-workers from far and near, the Flax-Mill-Open-Day has developed into seems to be growing year by year.
Here are some of the highlights:
-         Christine Boyle/Belfast is returning after a break. The owner of the “colour and cloth” company who uses natural ingredients only for her price-winning dyeing will demonstrate linen-dyeing with things like blackberries, onion-peels and other products from the mill-garden.

-         Danna Herron/Gilford is ’s only professional female blacksmith. The daughter of forging/engineering legend David Herron will be setting up a large hand-bellowed forge and make sparks fly in tandem with her father.  They will be joined by German Ferrier Marius Eitelwein.

-         Elisabeth Corrigan/Antrim, Flax-Mill’s “commission-tailor, will show her new range of bespoke dresses. She opened her own shop (“Lizzienellie”) in Randalstown last year and will be accompanied by her daughter Eimear who is going to model some of Liz’s brand-new creations.

-         Flax-Mill’s new range of cloth and finished products is out and will be on show. With hand- and machine-woven linen – some of it made with yarn from our own flax – in the centre, Marion Baur and her team will also show some new tweed from Irish wool and a unique blend of linen and silk. Many designers and tailors have announced their coming to see the new products. Textile-design students Almha Mc Cartan (Dublin-College) and Miriam Johnston (University of Halle/Germany) had an input in design and making of a new range of one-off scarves which will be ready for the day.

Last Minute news:
4 Spinners working on 4 wheels!
Alongside Lynda Kelly and Eileen Patterson (Killeleagh) who produce high quality yarn for Flax-Mill’s weaving operation two other spinners have just confirmed their coming to demonstrate. The 4 master-crafters operating 4 spinning-wheels “in line” and beside 3 of Flax-Mill’s working weaving-looms will make for a spectacular show. They will be spinning Alpaca (the animals live just a few hundred metres from the mill), Irish wool and Irish linen. Of course some of their unique products will be for sale.

-         Ruth Walker is back! The Welsh jeweller and glass-artist with a base in Ballyclare kiln-fuses coloured glass in a high-temperature oven and manufactures bespoke jewellery and window-decorations. She also weaves melted glass; her creations have been used by Marion Baur at international fashion-events. Ruth has been at several Open Days, had declined this year due her extremely busy schedule. Due to public demand she has changed her plans and just gave us confirmation that she will run her unique stall.

-         ’s oldest lorry on the road will return. The 1929 Morris flat-back is owned by Craig Mathew/Garvagh and will bring some of the new crop of flax home to Flax – Mill. The “old lady” has been a feature at the Open Day and will be accompanied by many classic cars.

-         Flax-Mill’s contribution to “the year of food” is an international one! The much loved “catering-brigade” is jetting in from . Headed by friend od Flax-Mill, Andreas Stoib they will produce such treats as “sunken apple cake”, a 13 metre long buffet for the evening – guests, a huge selection of salads from the gardens, “tomato – butter a la Steff” and other goodies.

The organisers are urging people to book their place, especially for the evening event. Marion Baur:
We have always had busy Open Days and the gig in the evening had to be limited in numbers every year. This time demand is huge, the number of visitors from abroad exceeds anything we have experienced. Whilst we strongly recommend visitors for the day to let us know they are coming, concert and session are a definite “invite only” affair this year, otherwise we couldn’t cope with the numbers. We try our best to cater for as many as possible but in order to do that right and to the detail we provide people have to book for the evening. They will not regret what they are getting.”

Important notes for editors:
-          This press-release is free for immediate publication.
-          Open Day and Yard-Fest are private events; the owner reserves the right to refuse admission at all times.
-          There is no cover-charge.
-          For all up-front interviews, photo-shootings etc. please contact Hermann at Flax-Mill as soon as possible: 02877742655 or flaxmill@gmx.net
-          Photographers are welcome, recording at the concert requires special permission as does all filming.
-          Due to many request by journalists from abroad, both Colum Sands and Willie Drennan will be present during the Open Day and prepared for interviews. These have to be booked (contact Hermann).