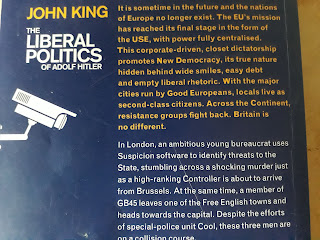 John King's novel, 'The Liberal Politics of Adolf Hitler' is in classic dystopian style and imagines the evolution of the EU into the totalitarian United States of Europe. The striking thing about this book is that it was published in 2016: written before the referendum, and yet King's projections seem to be already manifesting rapidly.

Once you have read King's novel, or at least when you have read it for the second time and examined it in depth as I have done, you are continuously struck by how quickly his predictions are materialising. EU leaders now talk quite openly about federalisation, developing central authority and the formation of an EU army: the United States of Europe.

Read more »
Posted by theulsterfolk at 07:00 No comments: