Patterns of History in the Present Day 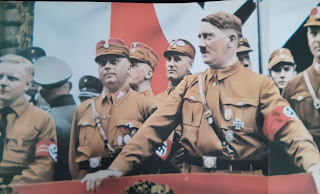 The patterns of life are recurrent and only vary to adapt to the evolution of humankind. Occasionally the patterns have been so horrendous that when they have run their course there is a belief that those patterns could never be repeated. But they always are.

People who compare behaviour of today's global powers to the early days of Nazi Germany are regularly blasted and maligned as dangerous imbeciles by those who conform to globalism. They are chastised for comparing the genocide of Jews to present day global lockdowns and digital ID systems. But I don't see anyone making that exact comparison.

What they do compare to the present day is how Hitler's Nazi Germany developed: the origins, from the moment WW1 ended in 1918, and how it slowly but surely evolved during the 1920's and 30's.

In my younger years I travelled and worked in different countries for several years. I met and befriended Germans for the first time in Crete -  just 32 years after end of  World War Two.

Also shortly afterwards in Israel I met and befriended more young Germans - 32 years after the end of WW2.

I spent two winters living and working on two different Kibbutz where there were many young volunteers from UK, across Europe and actually from right across the world. I lived there for 11 or 12 months in total. I befriended many young Israeli Jews at that time also.

I met and befriended young people from several countries across the world at that time. But I'm highlighting the Germans and the Israeli Jews because this was at a time when it was considered prudent to not mention the war.

The first Kibbutz I was on, Tel Yosef, had many elderly people who were Holocaust survivors. The mental scars of their personal traumatic experience and first hand knowledge of horrific genocide was ingrained in many of their faces: stored forever in the essence of their being.

From their family members I heard detailed accounts of the extent of the trauma, torture and genocide . The extent of the medical experimentation was particularly harrowing to hear about and to contemplate. This is what was addressed in the Nuremberg Trials of 1946 and the subsequent Nuremberg Code.

I hadn't previously been aware of the finer details of what actually happened in the concentration camps. It was shocking. I just couldn't understand how one group of people could possibly have carried out such atrocities to fellow men, women and children of all ages.

And after the Kibbutz experience I met and befriended more Germans which led me to spend a bit of time in Germany itself. In a charming small village in the south of Germany I had friends who's fathers and uncles fought for the Nazis in WW2. I found many of these people to be the salt of the earth. Among them were some of the warmest, generous, sensitive, intelligent and sincere people you could ever meet.

I was confused. Once again I asked myself over and over - what the hell had gone wrong before and during the war that allowed normal, decent human beings to turn into servants and supporters of evil tyrants?

The other obvious question that puzzled me for a long time, was how did so many Jews not understand what was happening until it was too late? How did it all come about?

Part of the answer seems to be that it all came about by stealth and manifested very gradually over a considerable period of time.

In conjunction with this the Nazis also used sophisticated tactics of spreading propaganda and fear, on the one hand - and rewarding and promoting the compliant and the faithful on the other. The ancient traditional tactic of divide and conquer was also a key part of the strategy.

This didn't just happen in Germany alone. All countries that the Nazis invaded had sympathisers, and devotees who were happy to carry out orders to advance the cause of the Third Reich. They even had some support in the UK, but not enough to give them confidence that they could conquer Britain. Even the fact that they had more support in Ireland, where the IRA were in active collusion with them – did not give Hitler enough confidence to land his troops in the British Isles.

The Nazis, though, were not the only tyrant authoritarians and totalitarians who had notions of world dominance during that time period. There was Stalin's Soviet Union, Chairman Mao's Communist China, and Mussolini's Fascist Italy. Mussolini was apparently trying to bring back the good old days of the Roman Empire. The rise and fall of the lot of them was all part of the same pattern. None of this happened over night. Their rise to power and dominance was slow and methodical: well planned. Their tyranny eventually collapsed of course: as will all present and future tyrannies.

Another factor was the control of information in the mid-20th century. At a time when news was not easily and quickly spread far and wide it was much easier to control and perpetuate propaganda.

We are, however, back in that place today with the global empire now having absolute control over mainstream media in all nations. It is only one type of news that gets told: the same news all across the world. The same news that is paid for by the same source. The same source of the money owns them all. Global mainstream media has fallen beyond redemption. Gossip in the pubs is now a more relevant and reliable source of information and news.

There is social media which can provide news from across the world within moments of when it happens -  but the owners of those media platforms now also restrict and control how much alternative news it allows. The same source of money owns them as well.

The two-tiered global society is well under way once again – this time it is happening right across the world as the non-compliant dissenting voices are identified, registered, demonised, discriminated against and systematically segregated, silenced and cancelled. Many are already forbidden to work in certain jobs, travel or enter certain premises until they can produce the global digital ID certification. We are definitely entering a time that replicates a pattern found throughout history.

It's all there in plain sight - developing within countries and communities. Nations and communities are being divided and conquered once again. As in 1930's Europe the people are not given access to the full facts. The pattern of oppression from those who seek world dominance is upon us once again. We need to be vigilant and challenge this onslaught of totalitarianism at every turn - in order that the next generations can get back to experiencing the old normal once again: as soon as possible. Previous generations did this for us.

Yes, life's historic patterns are upon us: repeating and rhyming at us once again. It does seem that the history of how Nazi Germany evolved in the1930's is repeating across the globe in this present time. It is at least rhyming with the present day. That's my opinion, and the opinion of countless others: an opinion that commentators within mainstream media are not allowed to broadcast.

I do think it is crucial that the rest of us debate and urgently ponder this possibility. If indeed,  historic patterns of evil intent are playing out across the world right now it might be an idea to try to stop it before it evolves any further.

But what can be done?

It is all too easy and convenient for many people to have absolute belief in every piece of information that the authorities bombard them with via their TV screens. It is very easy and convenient for them to believe and accept without question - that by following orders, complying and conforming they are saving the lives of others.

It is just as easy and convenient to accept and obey now as it was back in 1930's Germany.

For the rest of us we cannot unsee what we've seen, unhear what we've heard and unlearn what we have learned.  What we can do is share what we know, what we believe, and hope more of our friends and family will pause to listen.