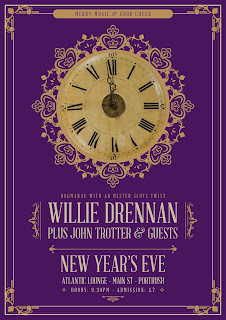 It is with deep regret that I have to pull out of the gig on New Years Eve in the Atlantic Bar, Portrush. Myself and the band members were very much looking forward to this gig as we love this wonderful North Coast music venue.

The reason is due to the Vaccine Certification that has been imposed by our Stormont Assembly. This means that some of those who would have liked to attend cannot do so as they are strongly opposed to this government mandate. I am also opposed to this mandate and it would have been totally unfair to have discriminated against a section of our friends and fellow citizens because of their beliefs.

I had a long chat with Steven Ross, owner of the Atlantic Bar today. I have the greatest respect for Steven's position as he has been coerced into an impossible situation by Stormont. Likewise Steven fully understands my position.

Apologies once again to those who were looking forward to this event. I look forward to performing at the Atlantic Bar once again when some sort of normality and common sense returns to Northern Ireland.

While most people seemed to understand why I had to pull out of the gig, some don't get it.. Some musicians say they have been playing down south for months with no problems. In reality though they will only have been playing for the certified and the compliant..

A few folk have said, “sure all you have to do is get a lateral flow test.” And, “ sure the digitally savvy can manipulate the lateral flow tests to get the result they want anyway. So what's the problem”?

The problem is that the more people comply, the more mandates will be imposed. In some jurisdictions proof of a negative test is no longer an option anyway, and that will soon be the case in Northern Ireland as well.

The next big mandate will be for NHS workers to show proof of vaccination or else they will lose their jobs. That will then lead to all workers in all service industries being faced with ' No Jab, No Job situations.

The small venues like the Atlantic Bar are caught between a rock and a hard place. If they close down temporally there is a chance they might not be able to open again. If they stay open and don't comply with all the discriminatory mandates, they could receive massive fines and eventually be shut down anyway.

In the Arts, large constituted concert venues and performing arts organisations get core government funding plus project funding. They are buffered and will survive just fine - as long as they keep doing what they are told. Small independent venues and freelance musicians don't have that buffer.

It is my opinion, and my belief, that the only way freelancers and independents will be able to overcome and survive the diktats, is if there is mass non-compliance and concerted pressure placed upon our elected representatives to stop this segregation and interference into basic rights and freedom of choice.

Posted by theulsterfolk at 03:28 No comments: