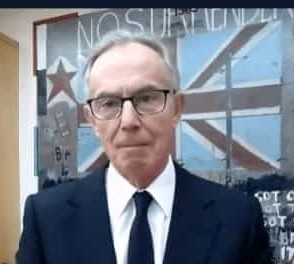 Sir Tony Blair. One of the most enthusiastic proponents of both NI Protocol and Globalism

It is time for the people of Northern Ireland who are opposed to the anti-democratic NIProtocol to join the dots and make the direct connection with the past two years of global lockdowns and mandates.

It is time to acknowledge that the governments of the world have been infiltrated by the World Economic Forum. The European Union and its commissioners are joined at the hip with the WEF, the United Nations and with those at the very top of the global pyramid of power.

It is time for the people of the world to understand that the agendas of the WEF, UN, the World Bank and the Global Media etc - are not conspiracy theories.

Klaus Schwab of the WEF has boasted that their Young Global Leaders have “penetrated the cabinets of the world”. Justin Trudeau gets an extra honourable mention but none of the major countries of the world have been excluded.

Ursula von der Leyen didn't get ushered into the position of President of the European Commission because of her good looks and skills alone. The EU and nation states might be just mere cogs in the wheel of the greater Globalist System but the EU is a significant cog and a key partner of the WEF. The global leaders are all cut from the same cloth.

The governments of the United Kingdom and Republic of Ireland have of course been “penetrated” by Klaus and his comrades as well. Politicians in the devolved governments and in the opposition parties have also been groomed to earn position within the new global pyramid of power. The enemy is within and is in control of our welfare, food supply, finances and freedoms.

If you still think this is the stuff of conspiracy theories you might as well stop reading now. Or perhaps you might want to consider the fact that, the Bill Gates Foundation-funded, Sir Tony Blair Institute enthusiasticly supports the NI Protocol as well as all other globalist mandates and lockdowns - and then perhaps read on.

The governments of the world in the past two years, have been following the one single script of imposing draconian lockdowns and mandates on to their citizens. They have succeeded in choreographing divisions within nations, communities, families, churches and social groups. They are prepared to initiate civil wars and even World War Three to achieve their ultimate goal of world dominance.

This is why the UK hasn't truly left the EU, six years after the nation-wide vote to do so.

It is why the European Court of Justice is still allowed to rule over many internal UK laws, via the NI Protocol.

It is why the UK hasn't taken back control of its fishing grounds and why they can't do anything to stop the continuous flow of illegal migrants into the country.

It is why Westminster hasn't invoked Article 16, ditched the Protocol and engaged in genuine debate to set up sensible alternative arrangements with the EU.

It is why so many politicians, corporations, bankers and media have been hell-bent on scuppering UK's independence.

It is why serious violations of human rights and freedoms can be mandated away without the people being able to do anything about it.

It is why the NI Protocol is enthusiastically supported by global leaders and global mainstream media.

A book could be written about the interconnection of it all. I know about this stuff as I stopped watching TV several years ago. But this is just a blog, not a book.

Getting back to the blog.

Many Irish nationalists have been hoodwinked into supporting the imposition of the NI Protocol as they have been told it will lead to a united Ireland – the United Ireland that generations of Irish people have fought for. But it won't. For two main reasons.

Firstly, the Protocol does not allow for a referendum on the constitution of Northern Ireland. Instead, the Protocol sets out how they believe it can be achieved by stealth. But it won't work as the Protocol overrides democracy. If the result of the 2016 Referendum cannot be implemented in full, for the whole of the UK, then democratic process has been made redundant far as Ulster Unionists are concerned.

The Protocol has wrecked the Act of Union of 1800, the Belfast Agreement of 1998 and the Stormont Assembly in one fell swoop. If the Protocol is not scrapped it will take a life-time for the people of this island to get back on track with the language of “parity of esteem, tolerance and mutual respect that the Belfast/ Good Friday Agreement set in place.

Secondly, a unified Ireland subservient to foreign EU/globalist authority is far removed from anything Irish freedom fighters have fought for in days of yore.

In 2022, in this centenary year of the Irish Civil War, subservience to, and dependence upon, foreign authority has no relevance whatsoever to what neither Free Staters and Republicans slaughtered each other over - one hundred years ago. Everyone of those Irish patriots must be turning in their graves at what this generation of Irish political leaders has capitulated to.

On the other hand if Brexit had been allowed to run its natural democratic course there would have been facility, at some stage, for referendum on whether the people of Northern Ireland wanted to remain in the UK or join the rest of the island of Ireland as part of the EU. The globalists couldn't care less about the traditional aspirations of anyone on the island of Ireland. Their agenda stretches across the whole wide world.

The EU/WEF do seek a united Ireland, but an Ireland united under their absolute authority.

The EU/WEF also seek a united British isles, but also under their absolute authority.

To date, fierce opposition to the NI Protocol has been driven by Ulster Unionists/Loyalists. Genuine Irish nationalists, who seek a free, united Ireland, should be opposing it as well. 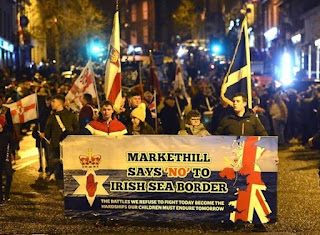 Recently, on a bitter cold February night an estimated 10,000 protesters attended an anti Protocol in Markethill.

To date, opposition to other global mandates, lockdowns, and Digital ID  have been driven by a wonderfully diverse group of unionists, nationalists, protestants, catholics and others. They have rallied in solidarity with kindred spirits in the south of Ireland, across Great Britain and across the world. Thanks to the globalist agendas and mandates people are now realising we have more in common than divides us. 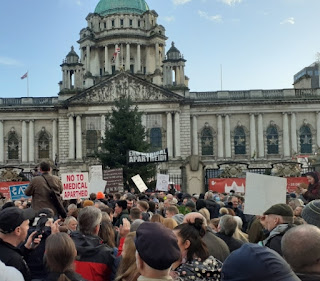 Regular freedom rallies have taken place outside Belfast City Hall since the start of Lockdowns in 2020.

Joining the dots and connecting the agenda of the NI Protocol to the agendas of the WEF, United Nations, Big Pharma, Big Media, Big Tech, and Big Banks is essential in order to restore basic human rights, freedoms, dignity and pride for people across the island of Ireland.

Joining the dots to connect the Protocol with the other globalist agendas is essential for all of the people of the UK who seek full sovereignity.

Joining the dots to connect the agendas of NI Protocol and WEF is essential for all the people of Northern Ireland who seek restoration of democracy, human rights and civil liberties. I'm not too sure why this happened on a larger scale to date. Might be something to do with the needs of politicians.

The Protocol will not be binned by Westminster while the EU Globalists are in control.

The Globalists will remain in control as long as the Protocol exists.